In the morning hours of South African time, the Canon EOS 70D DSLR camera was launched with much hype. The EOS 70D succeeds the rather “ordinary” 60D and it does so with an explosion of new features. From the specs, it will be a worthy rival to Nikon’s D7100, but I would have to get my hand on one in order to prevent unfair assumptions. What I can tell you though is that the Canon 70D includes groundbreaking autofocus technology. With its brand-new Dual Pixel CMOS AF technology, it can use 80% of its pixels to focus in Live View and Video modes. In other words, it is no longer dependent on the standard focus points to track moving subjects when in live view. For still photographers, there are a few massive improvements as well. Here’s a quick breakdown on what the Canon EOS 70D offers: 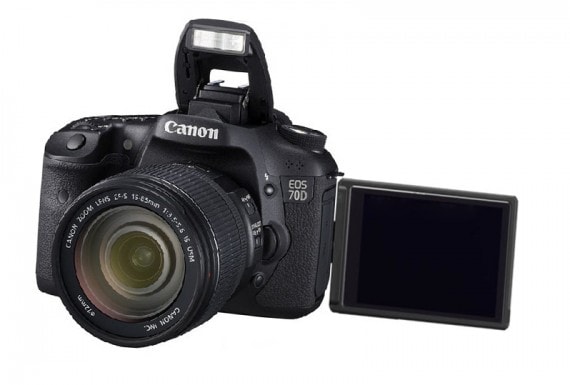 At the heart of the new innovations, the 70D comes with a 20.2-megapixel APS-C type CMOS sensor. The modest upgrade from the 18 Megapixels of the 60D, is apparently not so modest when you take into account that the camera has a smaller pixel pitch and slightly larger sensor area, which results in better noise handling.

The 70D comes equipped with a Digic 5+ processor. The same processor is used in Canon’s 1Dx and other high-end models. The Digic 5+,  combined with a new sensor, pushes not only pixel quality, but also make for an improvement in speed. At 7 frames per second, it will be fast enough for most enthusiast wildlife and sports photographers.

The revolutionary Dual Pixel CMOS AF technology is limited to Video and Live View. For still photography, the 70D borrows the 19 cross-type focus system of the higher-end Canon EOS 7D. This is a massive improvement from the 60D’s belated focus system. A few 6D owners will feel terribly let down because they didn’t get it as well! Having 19 cross-type focus points and an improved frame-rate will again appeal to enthusiast action and wildlife photographers. Unfortunately, the 70D does not have the joystick focus control of the 7D, but we pretty much expected it.

From reviews all over the Internet, the most hype is given to the Dual Pixel CMOS Autofocus system. For video, the 70D uses 80% of its pixels to track movement and focus. In simple terms, for focusing in Live View, the camera does not require a focus point to keep track of a subject. It uses a full two-thirds of its surface area from the center of the frame to focus! This new phase-detect AF system is a massive improvement on anything from the past and will be loved by professional videographers. Combine this technology with Face Detection and you will rarely have an out of focus subject when shooting video, although it will still have limitations when it comes to tracking fast action in video mode.

In the above section, I’ve discussed the most important advancements, but that’s not all it offers. Here’s a quick summary of the new 70D’s main features according to DP Review:

Will it be worth to upgrade to the 70D?

The 70D is certainly a welcome upgrade over the very dated and lacklustre 60D. Professional videographers will certainly eye the new technology. For still photography, combine the new improved focus system with improved speed and quality, and most enthusiasts who already invested in Canon lenses might find it irresistible. It is in all ways superior to the 60D and lower-end Canon EOS cameras. On the other hand, if you want more power and want to stick it out with APS-C, then it might be worth it to wait for the much anticipated Canon EOS 7D Mark II.

The Canon EOS 70D comes at a launch price of $1,200 (body only) if you pre-order from B&H. This roughly translates to R12, 000, excluding shipping. This means the 70D won’t be dirt cheap, but we can expect a better price-point when it hits South African shores. Anyway, it is would be sensible to wait a few months before you buy a newly launched camera.

Since it will take some time for us to get one of these babies in the hand, I’ve included a few useful review links to follow below…

Now we just have to wait…

About the Author: Danie Bester

Fine Art, Landscape, Architecture: The more abstract forms of photography like impressionism and minimalism intrigue me. I prefer creating images that depict energy, mood and silence. To illustrate my themes, I use mainly long exposures, selective focus and focus blur. My philosophy is that the camera is just a paintbrush and that thought-provoking images stem from a trained mind.