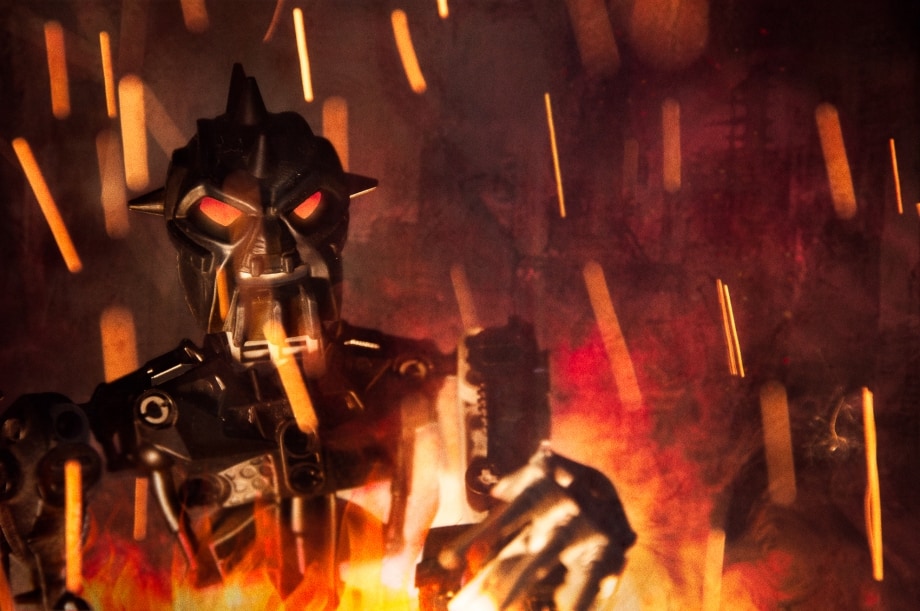 I joined Danie at arts on main this weekend where he was doing the practical session with the Basic course participants. The night before I was thinking about what I could shoot in the shed at Arts On Main. The room has little natural light and is pretty dark. So I thought of images I could shoot where that could be an advantage instead of a disadvantage. I love playing with fire and decided that the risk of burning the sheds down rather than my own house made much more sense. So I packed up my collection of pyrotechnics and headed off to Arts on Main. To create this image I needed, smoke bombs, a lighter, steel wool and a Lego Bionicle. 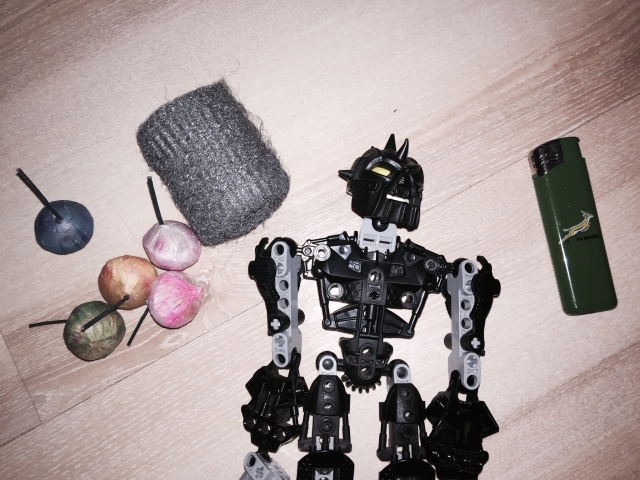 My goal was to shoot a cinematic and narrative piece. It is mainly for fun and experimentation as it has no real intended market. My other goal was to do as much as possible in camera and not through editing afterwards. However, as per usual, most of the look and feel came from the edit after all. I set my Lego Bionicle on a box and positioned my camera in front of him to compose the shot I wanted. The background was much brighter than I wanted it to be, but I was not too worried about it because I knew there would be smoke in the final shot between my subject and the background. I always try use a low iso for cleaner shots, so used 200 iso in this shot. My aperture was at 5.6 so I had a fairly shallow depth of field on the foreground and background elements but the main subject is sharp. I set my white balance to daylight even though we were indoors as this warmed up the image a little. 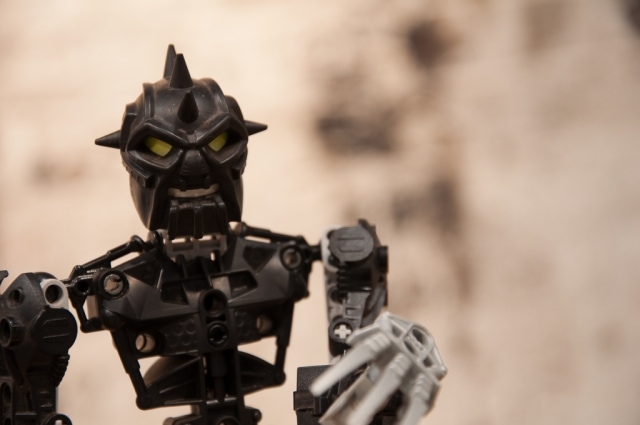 I started with a shutter speed of 1/8th of a sec, but it made the image a little bright and the trail of the sparks a little long, so I went a little faster on the speed. My shutter speed ended up at 1/45 of a sec, which is pretty slow unless you on a tripod, which I was. This however made my Bionicle a little too dark in the face. To make the falling sparks, I light the steel wool with a lighter and shook it just out of frame. The results were okay, but they are pretty unpredictable. 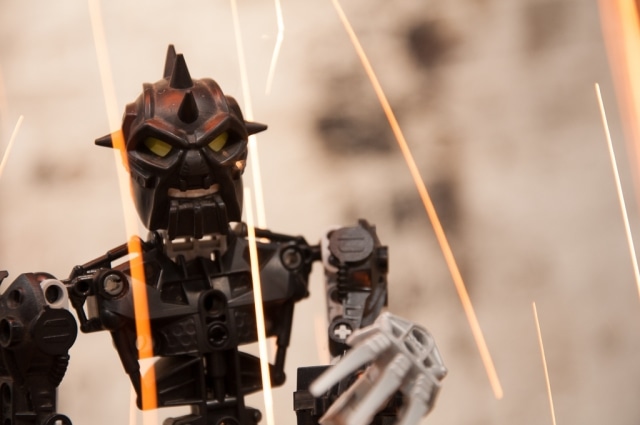 I also then added a backlight to rim my subject and define the smoke. This had an added effect of a little lens flair which added to the atmosphere of the shot. I put a flash with tungsten gel to add a little fill from the front. Now I was pretty much ready to shoot. 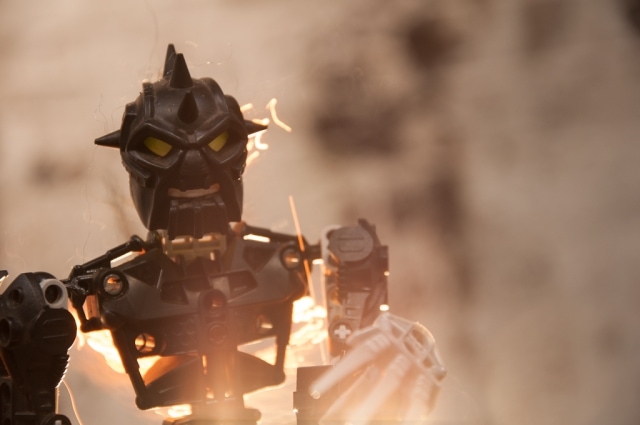 With all the elements set up I tried to combine them in one shot. I took the picture, Danie made the sparks rain, Leon light the wool and smoke bomb and Rufus controlled the smoke. So it took quite a few helping hands to get the combination of elements to come together. 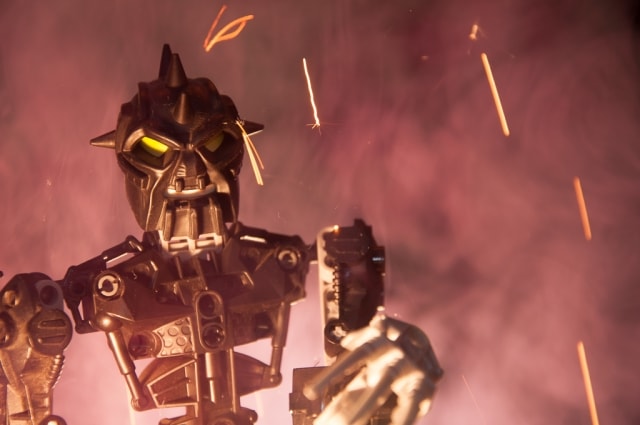 The shot I ultimately chose to work with is below, and formed the basis of the edit. I played with the contrast and exposure, tweaked the colour and edited the eyes. Added a little very basic dodging and burning and now we are starting to get a more dramatic and punchy look. 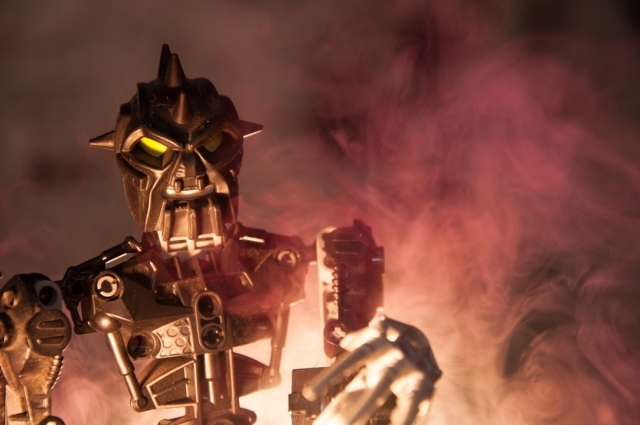 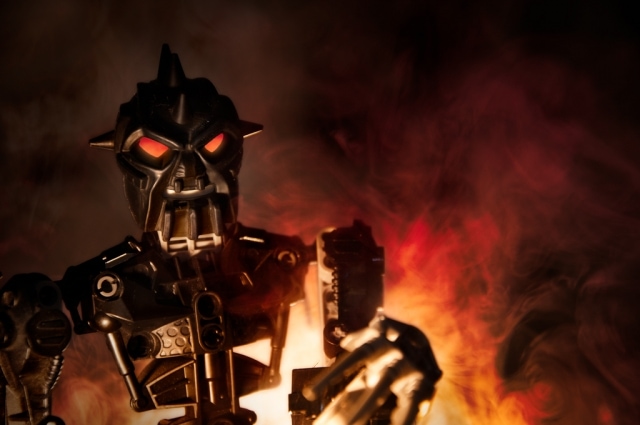 As you can see it does not have any sparks in it. I ended up reshooting sparks against black and then adding them to the photo with a “screen” blending mode. It makes the spark visible on the image and not their black background. I added an image with destroyed structures to create more story for the background detail. Added some layers of texture and noise to grunge up the image. I added fire in Photoshop which I just found out is a feature added at some stage. I then put a little heat distortion into the bottom edge to make the fire a little more realistic. And that is it… well until I fiddle with it even more, I can’t help myself. 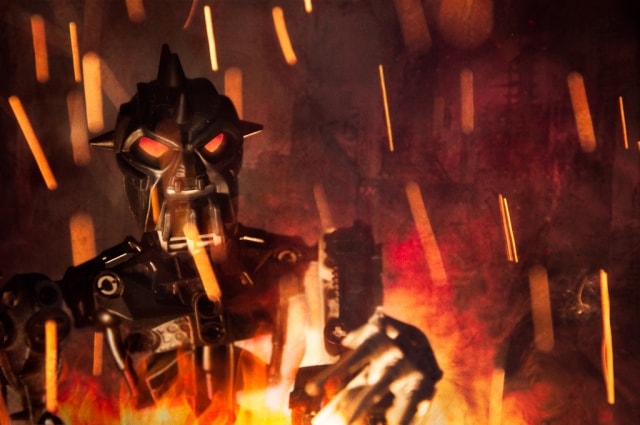 About the Author: John Fox

I enjoy doing detailed work as it requires concentration and silences the world around me. This drew me to the technical challenges of macro photography where I can happily lose hours while tinkering. The quest to shoot natural objects with a patience and dedication to honour their inherent beauty has also led me to explore fine art photography.